Two days of action against Sakine’s stoning in Toronto, Canada 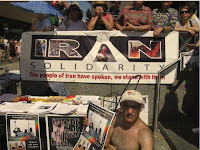 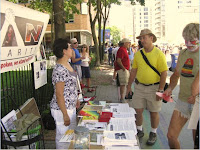 Torontonians were witnessing the campaign against Sakine Mohamad Ashtiani on 3 & 4 July in their millions participants at Gay Pride Parade days this year.

Iran Solidarity along with other groups as “Mission Free Iran”, P2E activists and “Iranian Civil Rights communities” had two days of informative tables including Banners, Posters, Photo exhibition, Flyers, Petition to sign. Petition was aimed at condemnation of Sharia Law in Iran which it violates human rights and gay rights in a brutal manner as stoning, execution, torture, rape, imprisonment for idea and many more in Islamic Republic of Iran.

We gathered about 3000 signatures in our petition which would be sending to UN Human rights Commission.

Majority of people thanked not only our activities but also us personally doing that. They felt the struggle of their own and thanked as for doing that from their behalf.

At the end of two whole days of hard struggle all groups’ participants promised to continue united struggle in the same direction hand in hand in future.