Iran Solidarity together with the International Committee against Stoning are organising the Iran Solidarity Tour and one of our first stops will be São Paulo, Brazil. Please read our latest public announcement below. 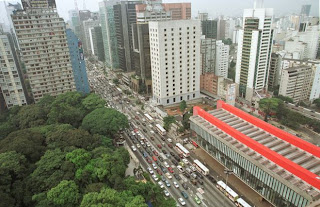 Mina Ahadi at TEDxESPM in Brazil  /// Launch of ‘Iran Solidarity Tour’
Mina Ahadi, spokesperson of the International Committee against Stoning (ICAS) will be speaking at the TEDxESPM conference on 29 September in São Paulo, Brazil. The day-long conference will see a host of Brazilian and international achievers talk on the theme of Communication Lighting up Minds.
Mina Ahadi’s speech at the conference coincides with the ‘Iran Solidarity Tour’ which has been organised by ICAS and Iran Solidarity. The Tour aims at building and expanding a solid and influential international network of support and solidarity with the people in Iran in their fight against the Islamic regime of Iran. In a series of events, meetings and campaigns, the Solidarity Tour will keep the struggle of the Iranian people in the world’s mind. Several meetings with organisations and government representatives in Europe and South America have been organised to lobby for the continued and outspoken support of people in Iran.
Mina Ahadi, International Committee against Stoning
Patty Debonitas, Iran Solidarity
20 September 2011
Contact:
Iran Solidarity, Patty Debonitas, spokesperson, iransolidaritynow@gmail.com, +44 (0) 7435156444
International Committee against Stoning, Mina Ahadi, spokesperson, minaahadi@aol.com, +49 (0) 1775692413
Note:
The TEDxESPM conference will be broadcast live at the following link: http://www.tedxespm.com.br/
www.stopstonningnow.com
www.iransolidarity.blogspot.com
No comments: 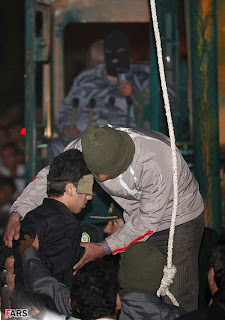 The Iranian regime hanged 17-year-old Alireza Mollasoltani publicly in Karaj today. He was accused of having stabbed Ruhollah Dadashi, a weightlifting champion.
To justify the execution of a minor, Ali Rezwanmanesh, a representative from the judiciary, said that Alireza wasn’t actually a minor as he had already reached his religious maturity according to Sharia. The years used in Sharia follow the lunar calendar and are therefore shorter.
One wonders how long the judiciary must have thought about this ludicrous excuse to justify the murder of yet another Iranian teenager in front of the world.
No comments:

Lauren Booth is challenged on her connection to Press TV

Sakineh Ashtiani, one year on 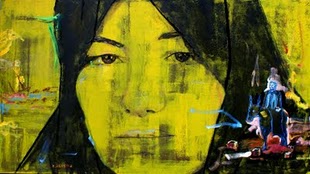 It has been one year to the day that the spokesperson of the Islamic regime’s foreign ministry announced that Sakineh Ashtiani’s ‘…verdict regarding the extra-marital affair has stopped and it is being reviewed.’
This announcement came in the midst of a massive, international campaign to save Sakineh Ashtiani from death by stoning. No doubt, under the immense attention and appeals from across the world, the Iranian regime tried to buy time. Since that time last year, Sakineh has been forbidden to receive visitors; she has no access to her family or a lawyer. By isolating her and intimidating and harassing her relatives and supporters, the Iranian regime wishes that the utter disgrace of trying to kill yet another innocent woman might vanish from the face of the international arena. But it won’t.
Sakineh has come to represent the suffering of a nation under the Islamic regime of ’s rule - with all its injustice, barbarity, misogyny and violence.
They tried to discredit Sakineh and those that support her in and internationally - all to make their barbarity more acceptable to the international community. In vain. The world has stopped buying the lies of the regime and the world is waiting for the safe release of Sakineh Ashtiani and her lawyer Houtan Kian who is also still in prison. The world is waiting for the release of all those other, as yet faceless, women and men who linger in the regime’s dungeons.
We are waiting for real justice to be handed out in an international criminal court to those who have been crushing life and dignity with their rulebooks, batons, fists and guns.
Sakineh Ashtiani’s stoning sentence has not been revoked.
We will not give up pushing for the safe release of Sakineh Ashtiani and her lawyer Houtan Kian.
Patty Debonitas
Iran Solidarity
iransolidaritynow(at)gmail.com
No comments:

According to news reports from Iran, at least ten people were executed in the last 4 days alone.

On Sunday, September 4, six people were hanged in Karoun prison in the city of Ahvaz (southwest of Iran), three of them for sodomy. ISNA, the state-run news agency only identified the men with their initials and gave no information of their age. The three people convicted of sodomy were sentenced under article 108 and 110 of the Islamic penal code.

On Tuesday, September 6, four men were hanged in the city of Kerman for alleged drug related offences.

Clearly the Islamic regime of Iran is continuing with its killing spree that started in December last year.

Last month, Catherine Ashton, EU High Representative in foreign affairs and security policy, condemned the ongoing executions in Iran and demanded and end to it. In a statement Ms Ashton said: “I am deeply concerned because of the increased number of executions in Iran. Based on data gathered from many sources during the first half of 2011, the rate of executions in Iran in proportion to its population, places Iran at the top list of users of executions.”


Let's keep the spotlight and pressure on the Islamic regime's killing machine.
No comments:

"Azerbaijan rise up and cry out"

Yesterday, Saturday 3 September, saw yet again thousands of protesters on the streets of Orumieh in the Iranian province of Western Azerbaijan protesting against the inaction of the government to save lake Orumieh (or Urmia), one of the largest saltwater lakes in the world. The protesters were attacked by the regime’s security forces.
Street protest in Orumieh
Lake Orumieh, in Iranian Azerbaijan is the largest lake in the Midlle East and it has lost 60% of its water in recent years. Two weeks ago the Iranian parliament voted against allocating funds to help revive the lake and some members of parliament have suggested that the population around the lake should be re-settled.
Recent protests against the lack of action by the government broke out last Saturday, 27 August, in the provinces of East and West Azerbaijan.
Yesterday, Saturday 3, saw again thousands of protesters coming out on the streets in Orumieh protesting against the government, shouting "Let's cry and fill Lake Orumieh with our tears,". They were met with a heavy presence of security forces. According to several sources the security forces attacked the protesters using batons, rubber bullets and tear gas. Dozens of people were arrested.
Arrest of people in Orumieh
A planned protest in Tabriz did not happen due to several arrests and intimidations by security forces. Tabriz has already seen weeks of separate incidents of protests relating to the dying lake. On August 23 football fans shouted anti-government slogans at a football match in relation to the dying lake. The next day, a group of about 30 activists were arrested whilst discussing the state of the lake and having dinner together (during Ramadan). At a first protest in April this year, 70 people were arrested at a protest in Tabriz; many sentenced to lashes and fines.
No comments: