for Sakineh - from Norway 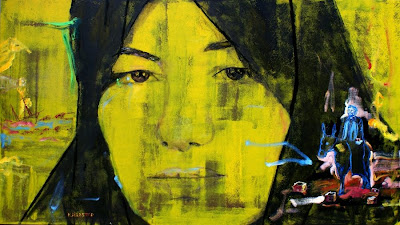 The Norwegian artist Børge Kjeldstad has painted this picture of Sakineh Ashtiani "in protest against the mistreatment of her and the stoning sentence."

The picture can also be viewed here

PS And yes, Sakineh Ashtiani is still being held in prison without access to her family or her lawyer. Her lawyer Houtan Kian is also still in prison. Both are still facing execution.
1 comment:

We have received this letter from Lydia in London.

I went to my local dry-cleaner and shoe repair shop with a sandal that needed a few stitches. The shop -- so far as I know -- is owned and run by Kurds and at least two of the assistants in the shop are Iranian Kurds. One of them is a young man who sits in the window working at his sewing machine repairing clothes. He is not always there, so I was very glad on Thursday to see that he was; the weather is hot and I wanted my sandal repaired as quickly as possible.

The repair man speaks only very basic English so we rarely exchange more than a few friendly words of greeting but as I put the sandal on the counter and said how glad I was to see him, I noticed that he really did not look all that well. I asked him if he had lost weight. He said he might have. I then asked if he had been trying to lose weight or if he was ill. He said he had been having some family troubles.

Then he said that three weeks ago his brother, married with five children,had been hanged in Iran.

I could not get much information about the circumstances. I was too shocked and the young man's English was not good enough but he told me that all that had happened was that his brother had got into trouble with his papers.

Apparently his family were then subjected to what I believe is an entirely typical sort of authoritarian sadism -- they were told shortly after the arrest "don't worry, he'll be free by next week". Then a few days later they got the news that he had been hanged.

I suppose the monster who promised the family their son, brother, husband and father's freedom in a few days is still laughing over the joke he had made about the nature of liberty.
No comments: 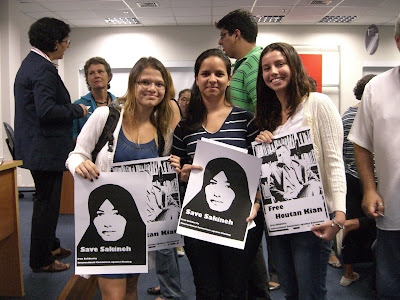 ICAS in Brazil! In support of Sakineh Ashtiani and the people in Iran!

Here is the report of the recent trip of the delegation of the International Committee against Stoning (ICAS)in Brazil. The trip focused on the human rights abuses in Iran under the Islamic regime, especially the ongoing wave of executions and stoning. Mina Ahadi, spokesperson of ICAS, continued her lobbying work for the release of Sakineh Ashtiani and her lawyer Houtan Kian. 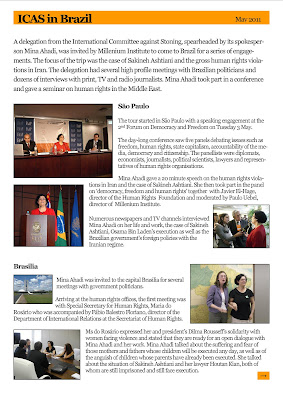 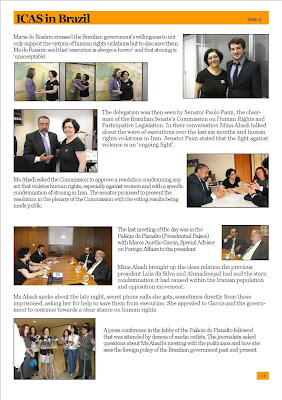 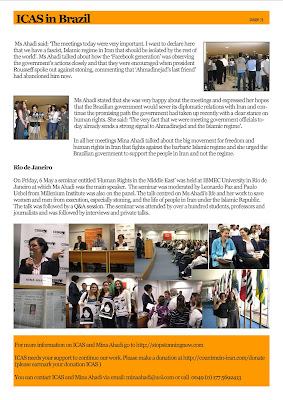 In solidarity with student protests in Iran on Sunday, May 15 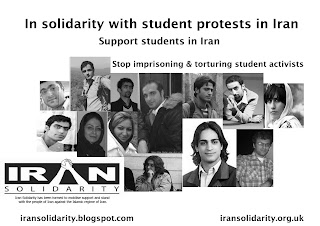 Students from over 30 universities across Iran, including the cities of Tehran, Tabriz, Esfahan, Karaj and Gilan, are going to protest this coming Sunday to call for the release of all student political prisoners and against the dictatorship under the Islamic regime of Iran.

Student activists in Iran are routinely banned from studying, imprisoned and tortured. They are put in solitary confinement, barred from visitation rights and they are sentenced to years in prison just for being student activists. Milad Asadi, Ashkan Zahabian, Zia Nabavi, Arash Sadeghi, Sarah Mahboubi and Fouad Sojoudi are just a few of the dozens and dozens of students currently in prison.

In a statement the students said: “At a time when the wind of Spring is blowing throughout the Middle East, Iran has not been exempted from the fragrance of this wind and once again, the universities, the bastion of steadfastness and resistance, stood up from under attack of the anti-freedom despots and gave new hopes to those eager for freedom that: yes, universities are alive... Because when despotism is on the throne, silence is not our virtue.”

We salute the courage of the student activists and of all those who are going to protest this Sunday in the face of utmost repression by the Islamic regime in Iran. We hope you join us in calling for an end to the imprisonment, torture and persecution of student activists and we demand their immediate release.

Leave a comment under this post in solidarity with students in Iran or email us at iransolidaritynow(@) gmail.com

There will be a solidarity protest in London, UK this Saturday 14 May on Trafalgar Square, 2-4pm.
No comments:

A delegation of International Committee Against Execution (ICAE), consisting of Mina Ahadi and Patty Debonitas (also Spokesperson of Iran Solidarity) met with the Millenium Institute based in Rio de Janeiro today with a series of politicians of the Brazilian government to discuss the human rights violations in Iran, specifically stoning and executions and the case of Sakineh Ashtiani.

The meetings were part of a tour that started in Sao Paulo on 3 May with a day long conference on "democracy & freedom" at which Mina Ahadi, spokesperson of ICAS, gave a speech on Iran and took part in the panel on democracy, freedom and human rights.

The delegation was in the capital Brasilia today, welcomed first by the minister Maria Do Rosario, secretary for human rights accompanied by Fabio Balestro Floriano, the director of the secretariat of human rights, department of international relations. Minister Do Rosario expressed her and president Dilma Rousseff's solidarity with women facing violence and stated the Brazilian government's willingness for an open dialogue with Mina Ahadi and her cause.

Ms Ahadi related the wishes and hopes of mothers and children whose loved ones are facing execution in Iran to the Brazilian government. Ms Ahadi talked specifically about the case of Ms Ashitani who has been sentenced to death by stoning. Minister Do Rosario stated that the 'death penalty is always a horror' and that stoning is 'unacceptable'. She added that the Brazilian government is not only committed to show solidarity with victims but to also rescue them.

In a second meeting at the Senate, the delegation met with the president of the human rights committee of the Brazilian Senate, Senator Paulo Paim. He said that the fight against violence is an ongoing fight and stated that he would present a resolution to the Human Rights Committee for discussion and approval stressing the importance of human rights in the world and to especially condemn the stoning of women in Iran.

Mina Ahadi will be speaking about the human rights situation in Iran and the case of Sakineh Ashtiani tomorrow, Friday 6 May at the IBMEC University of Rio de Janeiro.