Thousands protested against stoning this past weekend

There were numerous protests and acts of solidarity that took place this past weekend against stoning and executions and in defence of Sakine and others.

Here are some photos from the protest in London.

Also many sent in their acts of solidarity to us during the weekend. Here are a few:

Sean sent this message:
In light of the current situation in Iran, in which the government nearly stoned to death Mrs Ashtiani, I want to fully pledge my support to the work of your organisation. I feel deep sympathy for the people of Iran and I want nothing more for them than freedom, equality, democracy and secularism. I am eighteen years old, from the UK and don’t really know how I can be of use but I would be willing to do anything in my power to help. I want the next generation of Iranian youths to grow up in a country in which they are not discriminated against based on their sex, religion, ethnicity or political views but on the content of their character. God bless your efforts. With love. 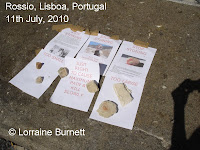 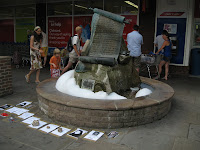 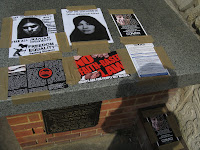 In Germany, Article 102 of the Basic Law the death penalty has been outlawed, i.e., it is unconstitutional, and for good reason. This is not only rooted in the experience of the Third Reich, but also due to other aspects that I would like to present briefly.
The death penalty has also long been abolished in all other European countries – except in Byelorussia, which is a dictatorship. The fact that it is still mentioned in the constitution of the German Federal State of Hessen is irrelevant, because in Germany, federal law supersedes state law. In the European Union, the death penalty is permissible with ratification of the Lisbon Treaty in exceptional cases only such as war or rebellion.
The intent of punishment is to give the offender the possibility of understanding that his or her act was unlawful and morally reprehensible, and in many cases this actually happens – albeit, not in all cases.
An offender who has been condemned to death does not have this possibility, because once he or she has been put to death, he or she will not be able to understand anything at all.
In other words, the idea behind the death penalty is not education or giving someone the possibility of gaining insight into his or her unlawful and morally reprehensible action.
Rather; the idea behind the death penalty is revenge, according to the “eye for an eye, a tooth for a tooth" principle which is embodied in the Old Testament and the ancient Jewish bible. This principle is actually rescinded by the statement "Let him who is without sin cast the first stone" from the New Testament, which was inspired by the Jewish itinerant preacher Jesus.
In the Old Testament, then, the point was one on one retaliation, or revenge, but the New Testament anticipates the possibility of forgiving once the offender has recognized the reprehensibility of his or her actions.
Revenge, however, is a base motive. The penal code of the Federal Republic of Germany states in Art. 211 (sentence 2):
“A murderer is a person who kills another person with malicious intent, cruelly, with means that are considered dangerous to the public, out of a desire to kill, out of sexual depravity, for greed or other base motives, or to enable or cover up another crime.”
This legislation in Art. 211, sentence 2, of the German Penal Code would actually apply to any enforcement of the death penalty – because until proof of the contrary, carrying out a death penalty can only be done using means dangerous to the public. Thus, according to §211, sentence 1, anyone carrying out the death penalty in Germany would have to be punished by life imprisonment(cf. http://dejure.org/gesetze/StGB/211.html). Any judge sentencing someone to death would be open to the charge of calling for or incitement to murder, at least from a moral standpoint.
There are always some miscarriage of justice in countries that still apply and carry out the death penalty – judicial errors, so-called – which cause the death of innocent people. When these miscarriages of justice have been executed, and one has realized that an innocent person was executed, there is always talk about “legal murder” – and rightly so, in my mind – because it is a homicide for base motives.
And carrying out any death penalty is always exactly the same, even if the verdict seems to satisfy the laws of the respective country.
Because vengeance is considered – I hope – a base motive worldwide. As laid out above, the death penalty does not constitute an educational measure, but rather a sentence rooted in a base desire for vengeance, i.e., in base motives.
Those who are for the death penalty should be aware of the fact that by speaking out in favor of the death penalty, they are either relinquishing, or have never recognized, the tenets of our Basic Law, our legal system and our moral values – which are also inspired from the Christian values of the New Testament.
Those in favor of the death penalty, who even tolerate the execution of an innocent person due to such miscarriages of justice – since miscarriages of justice do occur occasionally and are apparently inevitable – should be perfectly aware of the fact that they are approving of their own execution and should see to it that they themselves be executed, even if they are innocent. Anything else would be inconsistent, lacking credibility and ridiculous.
Those in favor of the death penalty could effect their own execution, for example, by going to Saudi Arabia and publicly insulting the Koran, the "Prophet" Mohammed, or Islam as a whole.
These "severe crimes" are punished by death in Saudi Arabia, as well.
Eckhardt Kiwitt, Freising, Germany

James Nichols sent the following message:
To stone anyone to death is a BARBARIC act.
Those who would perpetrate this are BARBARIANS.
Allah is indeed Akhbar, but in His wisdom will make us stand before Him to decided our actions. HE will assuredly send BARBARIANS to Jehanum.
Jesus also asked, "Who among you will throw the first stone?" He also knew Allah would decided the stone throwers actions and send them to HELL.
I PLEAD to you in authority to have mercy on this woman, Sakine Mohammadi Ashtiani.