Do not let the execute our youngsters

Photos of the five political prisoners executed on May 9, 2010 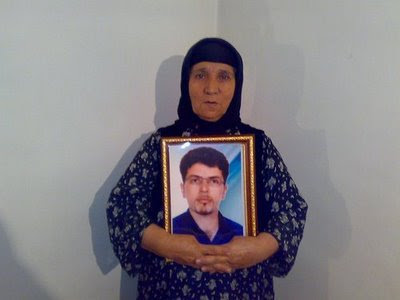 In the early hours of Sunday 9 May 2010, the Islamic regime of Iran executed political prisoners Farzad Kamangar, Ali Heydarian, Farhad Vakili, Shirin Alam-Houli and Mehdi Eslamian. The four men and one woman were executed for their political opposition to the regime. The sentences were carried out in secret, without their families or lawyers being informed, and despite the fact that three of the cases were under review.

Farzad Kamangar (born 1975) was a teacher and human rights activist who was arrested in 2006 and charged with ‘enmity against God’ in a ‘trial’ that lasted seven minutes. Mehdi Islamian was arrested on May 4, 2009 and spent six months in solitary confinement; his brother has also been executed. Shirin Alam Hooli was arrested in May 2008 in Tehran and sentenced to death in November 2009. Ali Heydarian and Farhad Vakili were imprisoned since 2006/2007.

The families of the five have called for a demonstration outside Tehran University in Iran for Monday 10 May. Many are expected to join the protest. Since yesterday, thousands have gathered in protests at the Islamic Republic’s embassies and consulates in various cities across the globe. In London, Paris and Frankfurt angry demonstrators have pelted the buildings with eggs, red paint and stones. Protests will be continuing throughout the week,

Farzad Kamangar’s mother recently said: ‘If anyone can do anything, please do. Do not let them execute youngsters en masse. You and the world shall be my defence. Please let the world hear my plea.’

1. You can find out about protests in various cities on the Iran Solidarity blog. You can also add your protests here.

2. Join us on 20 June 2010 to break that silence and take a stand against Sharia law and Islamism and in defence of universal rights and secularism. June 20 is particularly poignant because it is the first anniversary of Neda Agha-Soltan’s cold-blooded murder in broad daylight by the Islamic regime of Iran at a protest there. Like Neda, all Farzad Kamangar and the others wanted was freedom. You can find out more about the rally in Trafalgar Square here.

3. Support Iran Solidarity and its demands by signing up to our petition.

4. Join our daily acts of solidarity with the people of Iran. Since Monday July 27, we have organised acts of solidarity EVERY SINGLE DAY. It is easy to join in – just videotape or photograph yourself doing something and send it to us to upload to our blog. You can see other acts here.

5. Set up Iran Solidarity groups in your neighbourhoods, workplaces, universities and cities. So far we have groups in Australia, Austria, Canada, Germany, Norway, Sweden and the UK. Like the solidarity committees during the anti-apartheid era, these committees can be instrumental but we need many more in every city in the world for that to happen.