Sakineh Ashtiani to be hanged or stoned to death 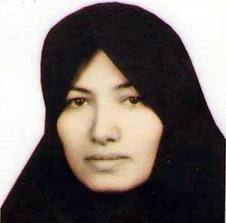 Today the Islamic regime of Iran announced that their 'experts' are studying whether they can hang Sakineh Ashtiani instead of stoning her to death. There is no doubt that this comes in an attempt by the Islamic regime to affirm their 'authority' in the face of worldwide protests and recent tit for tats with the West while at the same time finding a more 'acceptable' solution for murdering her. Possibly a solution that would face less resistance by the world?  Does the Islamic regime think that hanging Sakineh Ashtiani would be somehow more acceptable to the world that cried out in protest at her stoning sentence????  NO it wouldn't!

ISNA news agency reported today that Malek Ajdar Sharifi, the head of the East Azerbaijan province justice department, where Ashtiani is jailed said that "As soon as the result (of the investigation) is obtained, we will carry out the sentence."

The Islamic regime is trying to murder yet another innocent woman.
There is only one solution.
Sakineh Ashitiani must be freed immediately!