Berlin protest against executions in Iran 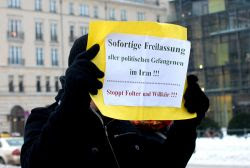 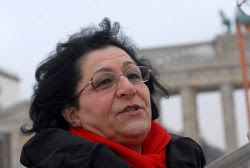 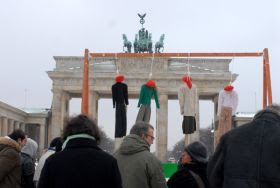 We thought we let you know about this protest that happened last Wednesday, 13 January in Berlin, Germany. Mina Ahadi from the International Committee against Executions spoke at a protest against executions in Iran at the Brandenburg Gate in Berlin.
The protest was called by Sharam Roghani from B90/Die Grünen. They had errected gallows on the square and spoke about the recent executions in Iran, 15 in the last two weeks alone. Mina Ahadi spoke about her contact with the mother of teacher and political activist Farzad Kamangar who is now awaiting his execution in Iran. He appealed to ordinary people in the world for help. Mina Ahadi spoke about the apparent indifference and lack of time of countless European and German politicians that she had spoken to, to stop executions in Iran; especially in the light of the strong business relations that Germany enjoys with Iran. Mina Ahadi asks: 'Frau Merkel, do you have two minutes? Two minutes to save some people in Iran from being executed?'