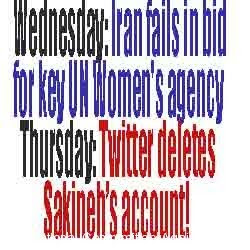 The Twitter account for Sakineh Ashtiani from ICAS has been deleted. Abbas Goya, ICAS site editor: 'Yesterday, the IRI failed to get a seat on “UN Women’s Agency”, ackonwledged by all as a result of our campaign for Sakineh. Why Twitter Attack? Last week, once ICAS exposed the execution plan of Sakineh, the world was outraged expressed specifically via MILLIONS of tweets on Twitter. As many of you might recall, Facebook accounts of two prominent humanist activists, namely Mina Ahadi and Maryam Namazie, were simultaneously dis-activated. It just so happened that they were leading figures in save Sakineh Mohammadi Ashtiani campaign! At the time we rightly suspected the IRI agents had something to do with it and that Facebook had fallen into their trap. We launched a campaign and within days their accounts were reinstated.This is the same story, a different day. This time, the occasion is so relevant that it is extremly hard to believe anything but the involvement of the Islamic Republic agents.