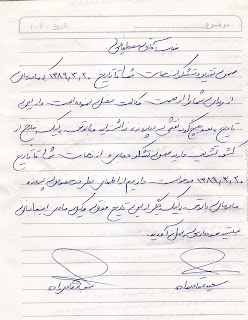 We thank you for all your efforts until 20.3.1389 (10 June 2010) when our mother, from prison, ended your mandate as her lawyer. From this day on you were no longer in charge of our mother’s case. Now that you are abroad and due to the fact that you were only responsible up until 20.3.1389 (10 June 2010) we wanted to thank you once again for all your efforts and ask that you no longer speak about our mother’s case as her lawyer.