This week's act on Trafalgar Square with Adam, Amir, Carl and Patty. 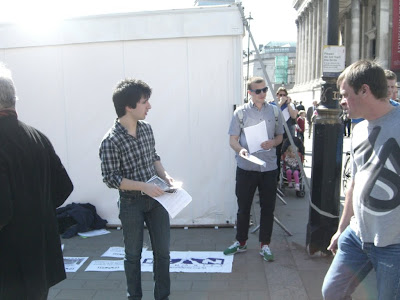 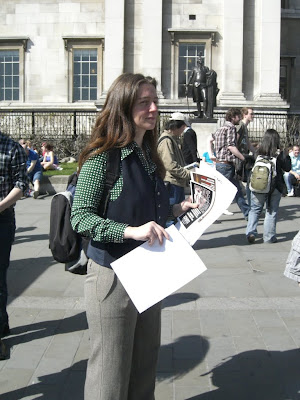 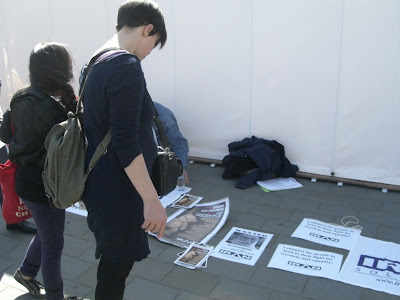 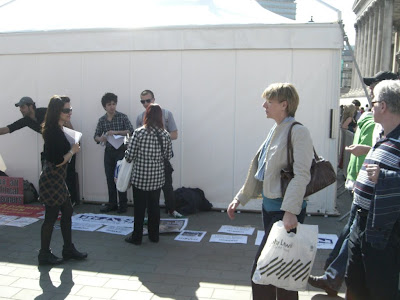 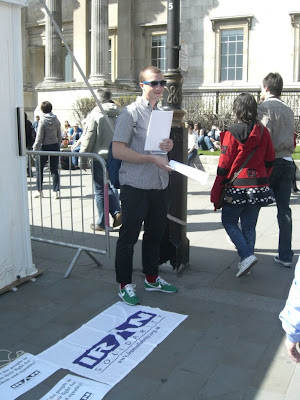 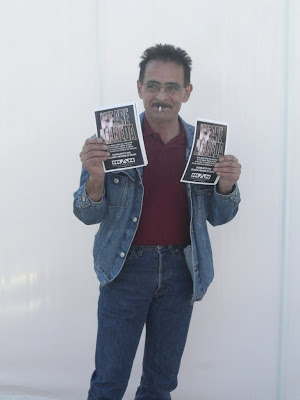 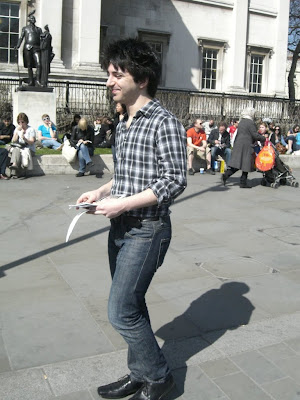 Week 2 – 17 April 2010 Starting last week, 10 April, it was ten weeks until the first anniversary of the 'elections' in Iran. Every week we are focussing on one demand from our list of ten.

Demand No 2: The arrest and public prosecution of those responsible for the current killings and atrocities and for those committed during the last 30 years

This is one of our main posters that we use for Iran Solidarity, a ‘Wanted’ poster with Khamenei’s picture on it. Underneath it reads: Wanted for crimes against humanity. For good reason.
The ‘Supreme Leader’ of Iran is indeed supreme in his responsibility for the crimes that have been and are taking place against the people of Iran. The world has seen much since June 2009 of the kind of abuses and crimes the Islamic regime is carrying out but the regime has been committing endless crimes since they took power in 1979. The mass executions in 1988 for example, in which the first ‘supreme’ leader Khomenei ordered the execution of tens of thousands of political prisoners “Destroy the enemies of Islam immediately. As regards to the cases, use whichever criterion that speeds up the implementation of the [execution] verdict." Not much has changed. Secret prisons such as Kharizak, the brutality within the prisons, the rape, the torture, extrajudicial killings, arbitrary arrests, sexual abuse, the daily violence on the streets and in homes sanctioned by the ‘laws’ of Iran, which are nothing but violations of the most basic human rights are happening right now while you are reading this. In a dictatorship such as Iran the line of holding people accountable for the crimes they have committed or have ordered and allowed to be committed is very clear. Start with Khamenei and work your way down.

Already efforts are under way to bring the criminals of the Iranian regime to justice. The International Criminal Court in The Hague - there to prosecute individuals for genocide, crimes against humanity, war crimes and crimes of aggression - is looking into opening a file against individuals of the Islamic regime of Iran; evidence and witness statements are currently being gathered. Others have started a campaign to get Iran thrown out of the UN Human Rights Council. We have to ask ourselves why the Islamic regime is still allowed to partake in gatherings of the UN, why its ambassadors and embassies are still welcome in other countries when they are nothing but an extension of the same barbaric regime that is ruling in Iran. Why do organisations and institutions let the Islamic regime hold its celebratation of its ‘Day of Revolution’s Victory’ abroad and why are the representatives of the brutal dictatorship not being prosecuted?

We must push the international community to speak out and take action. No military attack on Iran! No sanctions! that will only hit the already impoverished population, but a push by the international community to isolate the Islamic regime and its representatives in Iran and abroad and to prosecute those responsible for the terrible crimes that have been committed. And a clear and strong support for the people of Iran!