Help me stay alive and hug my children

To see video footage of the press conference, click here.

I’m Sakineh Mohammadi Ashtiani. From Tabriz Prison I thank all those who are thinking of me.

I went to school until the 5th grade. After I was married I had two children, and all my hopes are on them.

I am now quiet and sad because a part of my heart is frozen.

The day I was flogged in front of [my son] Sajjad, I was crushed and my dignity and heart were broken.

The day I was given the stoning sentence, it was as if I fell into a deep hole and I lost consciousness.

Many nights, before sleeping, I think to myself how can anybody be prepared to throw stones at me; to aim at my face and hands? Why?

I thank all of you from Tabriz Prison. Mrs Ahadi, tell everyone that I’m afraid of dying. Help me stay alive and hug my children.

Mina Ahadi also provided new evidence and information on Sakineh Mohammadi Ashtiani’s case as well as other cases sentenced to death by stoning in Iran. The new documentation refuted statements by the Islamic Republic of Iran that they did not intend to stone her to death. It also refuted a report shown at the press conference of a recent broadcast of the Islamic Republic of Iran's News agency on the 24 July International Sakineh Mohammadi Ashtiani Day protests and Sakineh's case. The report can be seen below in Persian:

Writer AC Grayling spoke of the contradiction between a medieval government and a progressive population wanting to be free whilst human rights campaigner Peter Tatchell stressed the importance of supporting Sakineh and all those languishing on death row. Iran Solidarity Spokesperson Maryam Namazie refuted claims made by the embassy of the Islamic regime of Iran in London and the former French ambassador to Iran that stonings in Iran were rare; she referred to a new report published by the International Committee against Executions which has found that over 100 people have been stoned with 25 known cases currently awaiting death by stoning in Iran.

A statement signed by 47 well-known personalities and organisations calling for an end to the harassment of Sakineh’s lawyer, Mohammad Mostafei and the release of his wife and brother-in-law was also issued.

The speakers ended their statements by calling for Sakineh’s stoning and execution orders to be rescinded and for her release and for an end to stoning and executions. The press conference, which was chaired by Iran Secular Society Director Fariborz Pooya finished at 12pm after which the panellists were interviewed by major media outlets present.

Here are a few photos of the press conference: 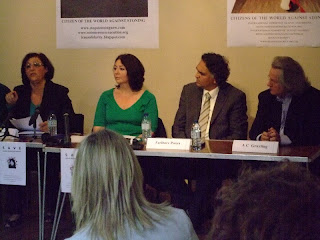 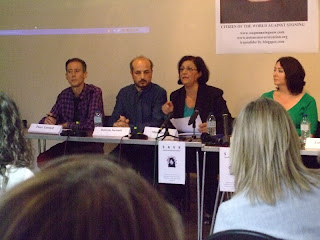 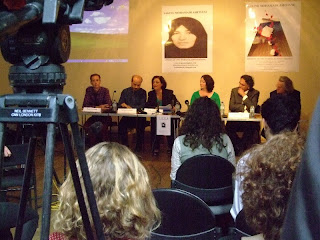